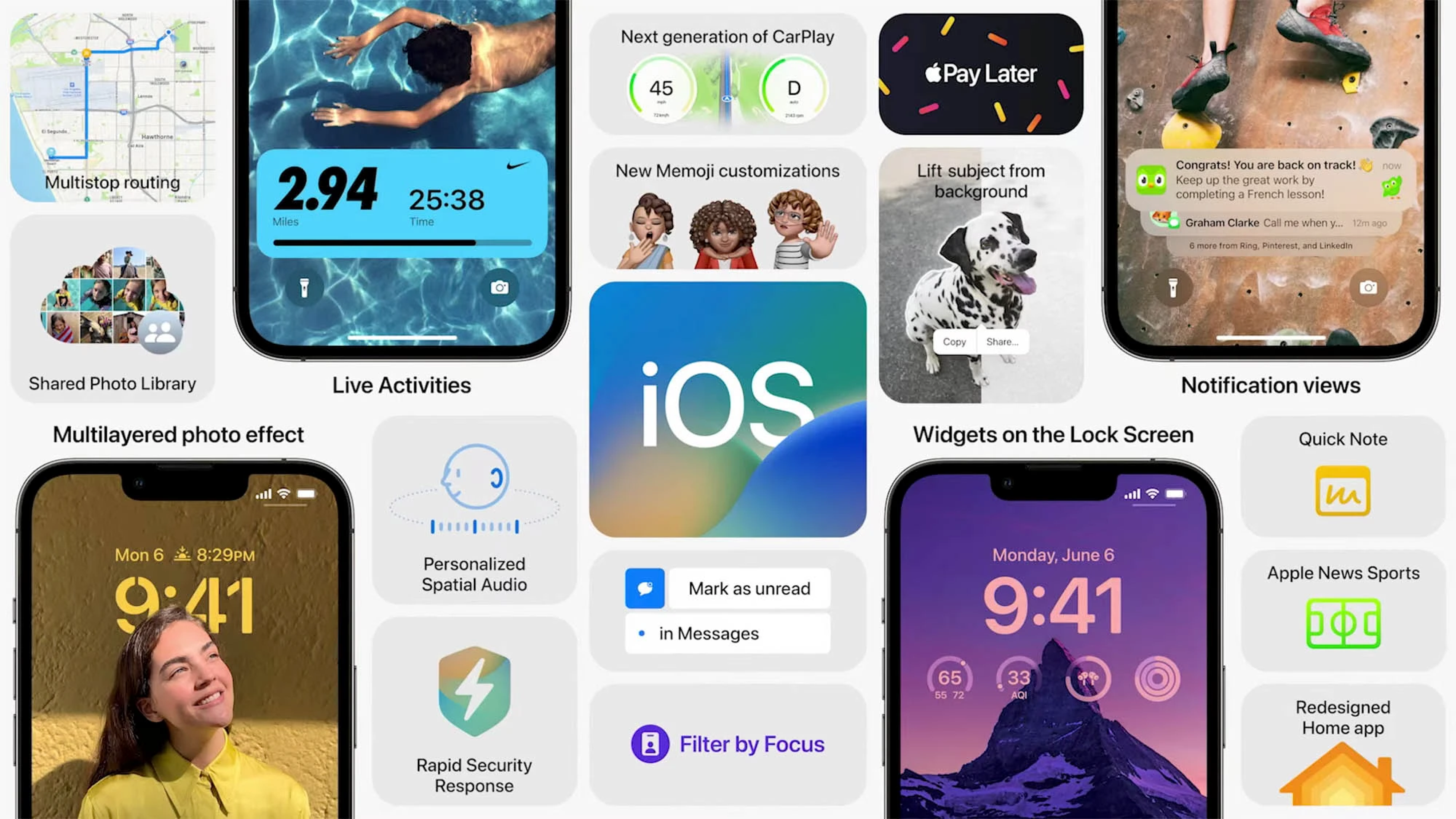 Developers have been treated to some truly spectacular new APIs, including a huge jump in SwiftUI's capabilities ( read more here ), but what does this mean for the rest of us?

We sat down and chatted through our highlights, focusing on the product opportunities that they bring, and listed them down below. We've included links to relevant WWDC sessions if you want to learn more, or nudge your developers to have a go.

The lock screen has seen the biggest set of changes since they changed from swipe to unlock. From a whole new look to live updating notifications, there's plenty here to get excited about.

Widgets have been wonderful since their addition in iOS 14,  but they only really got their time to shine thanks to the creation of apps like WidgetSmith allowing you to customise your home screen with them. If your users upgraded from iOS 13 to 14, they never got any widgets, and its quite likely they never added any.

With iOS 16, widgets have been added to the lock screen, and your users will get a couple by default when they upgrade. This is a great chance to get a glanceable piece of information on your users home screen without being worried about getting hidden by do not disturb.

Even better, if you add the right types of widgets, specifically the inline type, users can add this to their Apple Watch with no extra effort on your part.

Last year notifications got a re-work, with the new focus and summary system meaning that there's a pretty large chance your notifications won't be seen by users right away. This year, they extended these changes by shrinking the amount of notifications you can see on the lock screen as they take a back-seat to the wallpaper and widgets.

If it's appropriate, you'll need to make sure that your notifications are marked as time sensitive to get to the top of that very short list. Otherwise, make sure that you convince your users to not put you in their summaries.

Last years video on time sensitive notifications is a great intro to this.

Sometimes, a push just isn't enough. Think about when you’re following a basketball game and you get a push every quarter - what if you could get a push every single time someone scores? This would be great for information, but annoying for making your phone honk every few seconds.

Live Activities allows you a way around this - it lets you provide an activity to the lock screen, which can update the user on the fly.

Apple showed off sports scores, ordering taxis, delivery services and more, but I think there's more possibilities here. If you're in one of the categories Apple showed off, be sure to get involved, or get left behind.

These are coming soon, so be on the look out for updated documentation on them.

The new lock screen was a huge win, but Apple didn't stop there. iOS 16 has plenty more opportunities for you to extend your app into the system, so let's take a look at those too.

Having a glanceable weather forecast is an extremely useful tool for a whole bunch of apps. Whether you’re an app to track habits and feelings, or a travel agent, having a small preview works wonders for keeping users inside your app.

WeatherKit is Apple’s built-in API to make providing weather data simple, with reasonable costs that rival other similar APIs. Its quick and easy for your developers to adopt this, and you can get all-sorts of historical and future data to enhance your applications.

If you combine this with some of SwiftUI's new additions such as the one time location button, you can get some really excellent, privacy friendly results.

A huge win for privacy ( and the dreaded reset my password tickets ), Passkeys are here to change things for the better. Instead of setting up a password, you’ll setup a pass key which is end-to-end encrypted. These passkeys allow for password-less sign in, with no need for two extra two factor authentication.

You can now track your orders directly in Apple Wallet. This is up to you to provide this information, but you’ll be able to show people their order status right in their Apple Wallet. Apps like Shop are incredibly popular for consolidating orders across the web, and wallet could be the built-in counter to that.

Siri Shortcuts just got a huge improvement, with the tech that powers them becoming simpler than ever. Your app can now provide shortcuts to Siri before the user even opens the app, so you’ll show up straight away in the built-in Shortcuts app. Up to ten shortcuts can be provided with minimal development work.

For power users, this is a huge win, and with larger adoption we could see regular iOS users begin to use shortcuts. After the iOS 14 popularity boom to create custom Home Screen links, this could be the next step.

We think it's been a really exciting year, with plenty of quick win features that you could implement. Why not try a hack day where your engineers can have a play with some new APIs and see what they can do? We’d love to see what you come up with.

There’s also a whole other platform to look at, iPadOS, but we’ll leave that until next time....